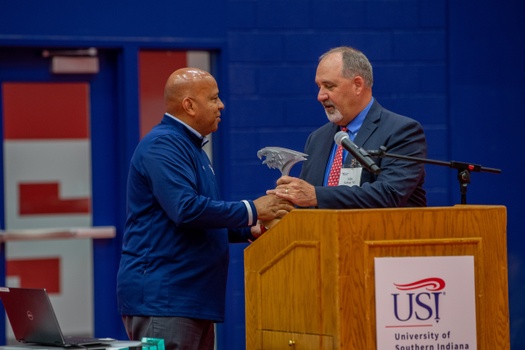 On September 16, 2021 John Schutz received the Suzanne A. Nicholson Leadership Award from the University of Southern Indiana.  This award honors University friends who have exercised strong leadership roles in fulfilling the University mission and who embody the late Susie Nicholson's dedication and spirit in meeting the needs of the University.

He leads by example at USI and his interest in a variety of University programs is genuine. Hecan be seen attending events, athletic games, and he is always thinking of creative ways to promote and advance USI. In addition to cheering on the Screaming Eagles in the classroom and on the court as a basketball season ticket holder for 25 years, he chooses to support students through generous charitable gifts. From merit scholarships to athletics, his engagement and support of USI is all encompassing.

He has been a part of many University milestones, most notably gaining independence as a separate state institution in 1985 and he served on the Foundation's 50th Anniversary Committee in 2017-2018. He chose to become involved in several University activities, even sharing his professional expertise by offering retirement courses on campus. His service on the Varsity Club Board of Directors helped raise the visibility of athletics at the University and in the community. He has been an outstanding advocate for the USI Foundation since joining the board nine years ago, and his service is invaluable.

He continues to support the University and Foundation in every way. Through involvement, example, and personal generosity, he exemplifies the very best qualities of leadership and reflects the ideals of the University.

We congratulate John on this very prestigious award.

His expertise, dedication and perseverance in a challenging year earned him this accolade of Best in State by Barron's.

The rankings can be found in the March 15th issue of Barron's Magazine, on Barrons.com, and in a special section in the Wall Street Journal on March 18th, 2021. Below is a link to the ranking table.

John is named Forbes/SHOOK "Best in State" Advisor for 2021

David, Felicia & Michelle are excited to announce that John Schutz is being recognized by Forbes/Shook Research as a “Best in State” Wealth Advisor for 2021. He was ranked #9 in the state of Indiana and the only Wealth Advisor located outside of Indianapolis who was ranked in the top 10.

Each advisor—selected by SHOOK Research—is chosen based on an algorithm of qualitative and quantitative criteria, including: in-person interviews; industry experience; compliance records; revenue produced; and assets under management.

Link to the full ranking: https://www.forbes.com/best-in-state-wealth-advisors/#53de4d24291d

As most of you know, John is never one for personal recognition. He would be quick to point out that this award is recognition for the work that our entire team (and Baird) does for our clients on a daily basis. David, Felicia, & Michelle would like to shine the spotlight on John and congratulate him on this incredible achievement! 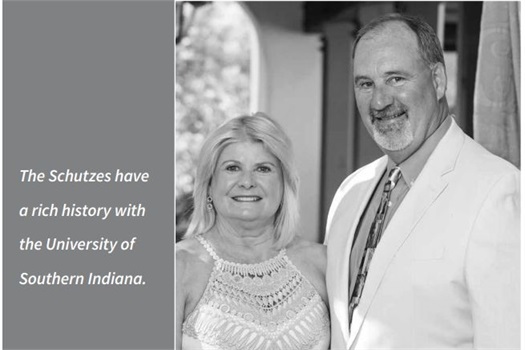 John Schutz Recognized by USI in latest "Faces of Philanthropy"

As many of you know, one of John and Cindy’s greatest passions in life is supporting the University of Southern Indiana – both with their time and their financial resources. For over 30 years John has taught retirement planning and Social Security classes at USI as part of the university’s Lifelong Learning program. For all of those years, John would work a full day at the office and then head to USI to teach on a volunteer basis, often times until 9:00pm or later. For those who know John well, you know how passionate he is about educating and helping others!

He also takes pride in the fact that he hasn’t missed a home basketball game in over 30 years. Even this year, when they’re not allowing fans in the stadium, he streams every game online and is a very active supporter of the entire athletic department.  He also currently serves on the USI Foundation Board of Directors, and has been very involved in other boards and committees over the years.

John and Cindy recently received a very well deserved award and recognition from USI for their efforts. They were featured in USI’s latest “Faces of Philanthropy” which recognizes a select group of local families and companies who make significant contributions to the university. I’ve attached a PDF of that edition as well as a link below if any of you would like to see it.

John is way too modest to ever mention this award on his own, so David, Felicia & I wanted to do it for him. I know many of you are also supporters and/or alumni of USI and share John’s passion for the University. The next time you see him and/or Cindy, please join us in congratulating him on this well-deserved award!

To start the new year, several members of our team have been awarded new titles.  John Schutz has been named a Managing Director.  The title of Managing Director is reserved for the most successful Financial Advisors who consistently demonstrate the highest standards with regard to production, compliance, Baird citizenship, leadership and overall contribution to the firm and community.

Felicia Hostettler has been awarded the title of Assistant Vice President.  Over the years she has provided excellent client service, shown leadership in the branch and the across the firm, and actively pursues understanding of Baird and its culture to implement the best practices and strategies for the most positive outcomes for our clients.

Michelle Vanover has been named a Senior Client Specialist.  She is responsible for client service and business development support of the Schutz Perigo Group of Baird.  She is proficient is all of Baird's technology platforms and has strong organization skills.  She also manages client events and works on marketing for the team.

Congratulations to the team members for their achievements!

Charities and Causes we donate our time, talent and treasure to:

We love our community and participate in many fundraisers as well as share of our time and talent where can: